At Pinckney Retreat, we are blessed to live near some of South Carolina’s most historic sites in Beaufort. But even closer to home is the old Retreat Plantation home. Set near the banks of the great salt marsh, this glorious building is part of the past that lives on today. Having survived war and abandonment, Retreat Plantation today is once again loved and well cared for by the residents of Pinckney Retreat. 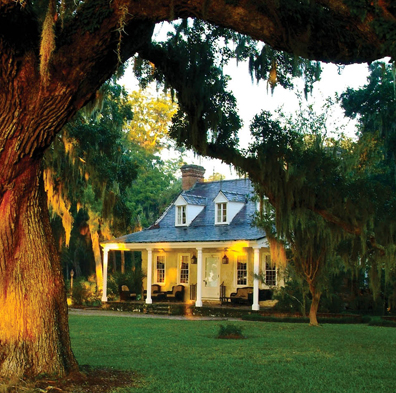 Historically and architecturally speaking, Retreat Plantation is remarkable as one of the tallest, double-pile tabby structures still existing. Tabby is a type of concrete made by burning oyster shells to create lime, then mixing it with water, sand, ash and broken oyster shells. Tabby was first used by early Spanish settlers in North Carolina and Florida, then by English colonists primarily in coastal South Carolina and Georgia.

Retreat Plantation was built in 1736 by dashing young French Huguenot, Jean de la Gaye, for his young bride Catherine Gautier. The happy couple enjoyed their home for the next 20 years. De la Gaye returned to France in 1769, and the home was sold to Stephen Bull.

By the time of the Civil War, Retreat Plantation was owned by the Reverend Edward Tabb Walker, who built the framed Chapel of East on St. Helena Island. When the war broke out, Reverend Walker fled with his wife and children to Walterboro in Colleton County. When Sherman’s soldiers arrived at the plantation, they pillaged the house and discovered the Walker family bible hidden beneath the floorboards.  Because it was the property of a minister, the general decided not to burn the house and it remained unharmed.

Occupied for most of the nineteenth century, the house was abandoned in 1912. By 1939, when Retreat Plantation was purchased by Mr. and Mrs. James H. Sturdevant, the house had fallen into disrepair.  The tabby, however, remained solid. The roof had collapsed, and interior materials had been looted. The Sturdevants completely restored the house, renovating and adding new wings.

Today, the house remains in splendid condition, with its 22-inch thick tabby walls, original fireplaces, and rich hardwood planked floors. Built out of love by Jean de la Gaye to last forever, it’s hard to imagine the Lowcountry without this wonderful old home. It’s a living testament to strength, endurance, and Southern tradition.