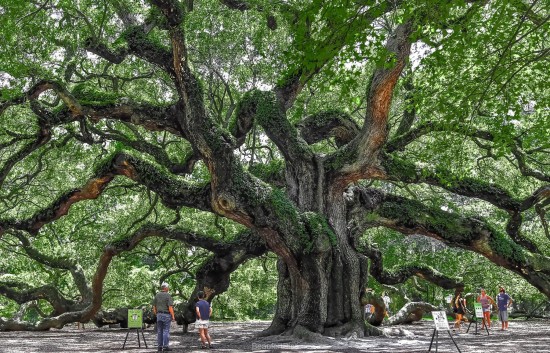 This Angel Oak photo was taken by www.beaufortpics.com.

The Angel Oak is a Live Oak (Quercus virginiana) that is a native species found throughout the Lowcountry (Coastal Carolina). It is located on John’s Island, near Beaufort, SC. It stands in a wooded area along Bohicket Road of John’s Island outside Charleston, South Carolina.Â Believed to be the oldest thing — living or man-made — east of the Rockies. InÂ excess of 1500 years old, its massive, draping limbs and wide spreading canopy present the aura of an angel but the naming of this tree was acquired from the tree’s previous owners, Martha and Justin Angel.

The Angel Oak has shaded John’s Island, South Carolina, for over 1400 years, and would have sprouted 1000 years before Columbus’ arrival in the New World. Recorded history traces the ownership of the live oak and surrounding land, back to the year 1717 when Abraham Waight received it as part of a small land grant. The tree stayed in the Waight family for four generations, and was part of a Marriage Settlement to Justus Angel and Martha Waight Tucker Angel. In modern times, the Angel Oak has become the focal point of a public park. Today the live oak has a diameter of spread reaching 160 feet, a circumference of nearly 25 feet, and covers 17,100 square feet of ground. www.historictrees.org