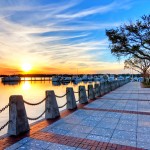 When history buffs think plantation life, what typically comes to mind is Charleston or Savannah with their stately live oaks, classic Old South charm and array of antebellum homes. But nestled between these two iconic Southern cities is another coastal town, smaller in size but large in historical significance. In fact, Beaufort, SC, on Port Royal Island at the Atlantic’s Intracoastal Waterway, has more antebellum homes than Charleston and Savannah combined.

It also has a rich Civil War legacy as the first South Carolina town to fall into Union hands; troops arrived six months after the opening shot was fired at Fort Sumter in Charleston. They freed the town’s more than 9,000 slaves and then employed these same individuals to help them build churches and restore beautiful private homes, some of which the former slaves ended up owning. Harriet Tubman, known for her heroic measures to help freed slaves, lived here between 1862 and 1865.

These are just a few of the many reasons Beaufort is a must-see place for lovers of Southern history, particularly the Revolutionary and Civil War eras. The second-oldest city in South Carolina, Beaufort was occupied by British troops in the 1700s. Beaufort National Cemetery was established two years after the Civil War began and since then, more than 14,000 soldiers – Union and Confederate, have been laid to rest here.

Called the “heart and soul of the Lowcountry,” Beaufort (pronounced “Beau-fort” by the locals and more often “Bow-fort” by outsiders) was initially a backwater town known for fishing, oysters and clams. Founded by the English in 1711, it became a shipbuilding port and by the early 1800s, was on the road to rising wealth through the vast production of rice, indigo and cotton, later referred to as “Sea Island cotton.”

Today, Beaufort is known primarily for its robust tourism. About 100,000 visitors a year, come for the glorious renovated antebellum homes, for the pristine islands (200 in all) that comprise Beaufort County, for the shopping, for the fresh seafood, for the Historic District and for a chance to walk through sacred cemeteries, visit reconstructed plantations, museums and chapels. The Gullah culture is alive and well in Beaufort, evidenced by descendants who weave artwork from the region’s sweetgrass or offer up their distinctive cuisine.

Hunting Island State Park, one of the most popular parks in South Carolina, is an easy 20-minute drive from Beaufort, drawing more than a million visitors a year, with fishing, camping, a nature center, nature trails, sandy beaches and the only lighthouse in the state with a viewing platform at the top for a bird’s eye view of Atlantic Ocean.

A strong military presence remains with Parris Island nearby. About 20,000 Marine Corps recruits graduate here annually. There’s also a 10,000-square-foot Parris Island Museum that tells the story of the U.S. Marines and their proud traditions, and includes an air base for military maneuvers.

Movie fans can tour the sites where Hollywood came calling, beginning in the 1970s with the filming of “The Great Santini,” followed by “The Big Chill” in 1983, “The Prince of Tides” with Barbra Streisand in 1990 and perhaps most famous, “Forrest Gump” in 1993. Visit the church where the character Forrest, played by Tom Hanks, prayed for more shrimp and see where the stars rented local private homes throughout their stay. Stories abound about Tom Hanks, Sally Fields and others during their time in Beaufort. “Jungle Book” was filmed at nearby Fripp Island and “Something to Talk About,” with Julia Roberts, contained several scenes shot on location in downtown Beaufort. “White Squall” and “G.I Jane” were also filmed here.

If You Go
Make your first stop the unique Beaufort Visitor Center on Craven Street. A mustard-colored, former Revolutionary War arsenal that faintly resembles a castle, it dates back to the 1700s. The staff, including information specialist Angel Nelson, goes out of its way to make tourists feel welcome. When asked why visitors come to her small town versus Charleston or Savannah (both are with an hour’s drive) the native-born Nelson says it’s because “we’re a friendlier, quieter and a quainter place to stay. It’s small and charming with everything you could want in one place.”

Next, take a horse-drawn carriage ride through the National Landmark District, with knowledgeable guides who explain the city’s history, from Revolutionary times to modern-day movie making. Bud Kea, of the Sea Island Carriage Company, says best time of year to visit is spring and fall when flowers bloom and the weather near about perfect. “But I love the Lowcountry year round,” he adds. “This is one place you won’t find ice and snow.” Bus tours, boat tours, van tours and bike tours are also available.

Hotels and restaurants
Accommodations are numerous, from the upscale AAA Four Diamond Rhett House Inn to chain hotels and rentals.

Food is one of the things Beaufort, SC, does best. At lunchtime, consider the Bistro at the Beaufort Inn, Bricks on Boundary or any of the mouth-watering restaurants on Bay Street. All are locally owned and have fresh seafood.

For dinner, try the award-winning Saltus River Grill, where everything is prepared fresh daily using the finest local ingredients. Located on Bay Street, with the waterfront only a few yards away for an after-dinner stroll, the upscale restaurant offers a raw bar with market-fresh clams, shrimp and oysters, several varieties of sushi, lobster, steak and salmon from the wood grill and chef specialties that range from buttermilk fried flounder to crispy fried Maine lobster tails.

This article appears in Go Magazine on the AAA website.