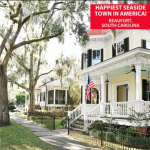 Coastal Living Magazine’s voting is complete and Beaufort, SC was selected as the “Happiest Seaside Town In America” by its readers. The voting began with nominations, plus all the past places that had been lauded as Dream Towns. From there, Coastal Living looked at the rank on the Gallup-Healthways Well-Being Index, percentage of sunny days, healthiness of beaches, commute times, crime ratings, walkability, standard of living and financial well-being of the locals, geographic diversity, and “coastal vibe.” Beaufort, SC was announced the winner on the NBC Today Show.